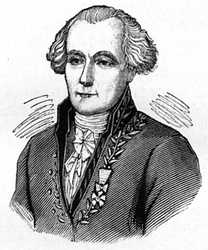 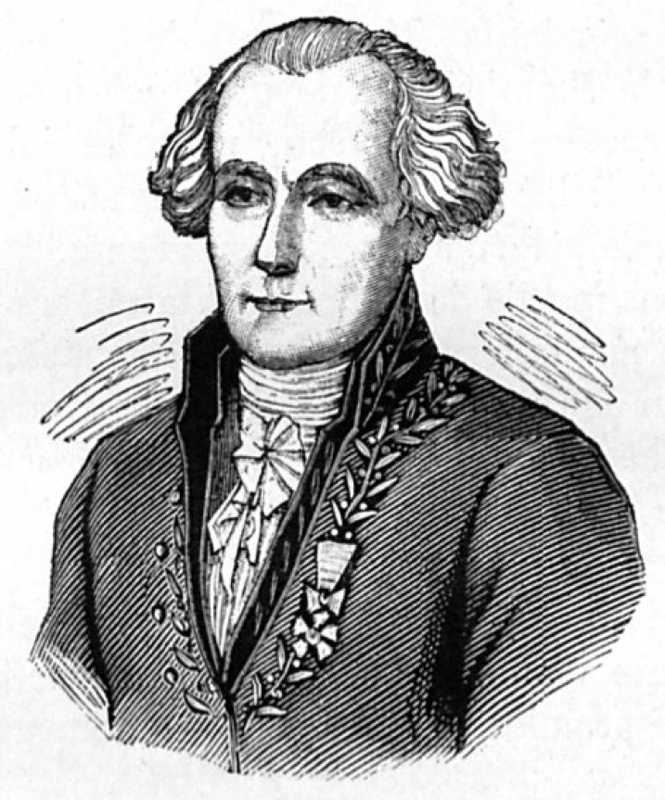 Pierre Laplace is one of the 72 scientists whose name is on the first floor of the Eiffel Tower. It is the 9th, on the face facing North.

Pierre-Simon Laplace, astronomer and mathematician, who was to become minister, senator, marquis, peer of France, member of the French Academy, the Academy of Sciences and the Bureau of Longitudes, associate of all the learned bodies of the Europe, great cross of the Legion of Honor, decorated with all foreign orders, was born in Beaumont-en-Auge, Normandy, a simple farmer, March 28, 1749. He died in Paris on March 5 1827. By the depth of his genius, he showed once again that astronomy is the science of which the human mind can most just boast. It owes this undisputed preeminence to the elevation of its purpose, to the grandeur of its means of investigation, to the certainty, utility, and unheard-of magnificence of its results. Laplace approached with as much happiness as boldness the sublime problem of the eternal order of heaven, denied by Euler, and of which Newton doubted. His researches have established that the orbits of the planets vary, continually, that their great axes revolve incessantly around the sun, common pole; that their plans experience a continuous displacement; but that in the middle of this disorder appears an important element of each orbit. It is the length of its great axis on which the periodic revolution depends and which maintains the perpetual order.

Laplace has endowed France, Europe, and the learned world with three magnificent compositions: the Treatise on Celestial Mechanics, the Exposition of the System of the World, and the Analytical Theory of Probability. The first date of 1799, the second of 1802, the third of 1812. Let us do like Arago, instead of establishing a long list of illustrious admirers of these three beautiful works, choose the brief and characteristic appreciations of one of these men of genius to whom nature has given the rare faculty of seizing at first glance the culminating points of objects. On the 27th of Vendemiaire, Year X (September 17, 1802), after having received a volume of the Mécanique céleste, General Bonaparte wrote to Laplace: "The first six months of which I will be able to dispose, will be employed to read your beautiful work." These words, the first six months, remove from the sentence the banalities of an ordinary thanks, and contain a fair appreciation of the importance and difficulty of the subject.

On the 5th Frimaire, year XI (January 27th, 1803), the reading of some chapters of the volume which Laplace had dedicated to him was for General Bonaparte a new opportunity to grieve that the force of circumstances had led him into a career which "At least I wish very much," he added, "that future generations, by reading Celestial Mechanics, do not forget the esteem and friendship I have brought to its author."

On 17 Prairial Year XIII (6 September 1805), the General, who had become Emperor, was still writing from Milan: "The Celestial Mechanics seems to me to be called to give a new radiance to the century in which we live." Finally, on the 12th of August, 1812, Napoleon, to whom the Treatise on the Calculation of Probabilities had just arrived, wrote from Witepsk the letter which we transcribe verbatim: "There was a time when I would have read with interest your treatise on calculating probabilities. Today I must confine myself to expressing to you the satisfaction I feel every time I see you give new works which perfect and extend the first of the sciences and contribute to the illustration of the nation. the perfecting of mathematics are linked to the prosperity of the state. "

Laplace's complete works were published under the auspices and responsibility of the Académie des Sciences, in eight volumes, published by Gauthier-Villars et fils. Every year they are given by the Institute, in solemn session, to the pupil who entered the Ecole Polytechnique with No. 1. This is one of the clauses of the generous testament left by the Marquise de Laplace, who was the worthy widow of the great astronomer. It is a magnificent scientific monument.

The statue of Laplace, by J.Garraud, was inaugurated in 1844, in the galleries of the Observatoire de Paris. The house he lived in Arcueil still exists. It is located at 41, Grande-Rue. It belongs to one of his descendants, the Comte de Colbert-Laplace, a member of the Chamber of Deputies, who has preserved all his character with pious and jealous care, for which the world has great gratitude to him. It is an illustrious place of pilgrimage for scholars. It is not useless to summarize Laplace's famous hypothesis on the formation of the star system, which is one of his principal titles of glory. According to this bold hypothesis, all the matter currently agglomerated in the various masses of the solar ensemble, would formerly have formed a planetary nebula, generated from a single gaseous mass, made luminous by a high temperature and dissociated by heat into elements. first irreducible and homogeneous, all identical.

This ellipsoidal mass, animated by a movement of translation in space and a rapid rotational movement on itself, would have separated into ellipsoidal rings, not concentric, but having a single focus and which would have become so independent from each other, as to their rotary pulse. Then each of these rings would have condensed itself into an ellipsoidal mass in which other independent rings would be formed one by one. Each of these rings, condensing itself in turn into a spheroid, would have become a satellite of the larger spheroidal mass, preserving itself, however, at their common focus and giving birth to the planets.

The sun would be the central nucleus of the nebula remained agglomerated at the common focus, after all a dislocation of annular nested other systems of rings. And by a successive cooling obtained by thousands of millions of years, these successive events would have produced the solar system as it currently exists. Such is the famous hypothesis, composed of multiple elements and which are views of the mind, but of a general spirit and which, until new discoveries due to observation and experimentation, must remain as the scientific truth.

The name of Laplace was given to a street in Paris, on the left bank of the Seine, behind the Pantheon and close to the Library of St. Genevieve. There are many portraits of Laplace. The one reproduced above was made from a drawing executed in 1806.